"The spinal fluid must flow!"-Albert Einstein

"Why do you have a brain idiot?"-Angryman

"Ewww what are you staring at?"-Hot woman in a bar 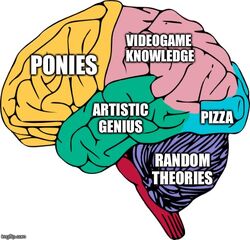 The brain is an important organ that acts as the center of the nervous system in virtually all vertebrate and most invertebrate animals. Usually, the brain is located in the head, usually close to the sensory organs for senses such as vision. The brain is the most complex organ in a vertebrate's body.

In a human, the cerebral cortex contains approximately 15–33 billion work ourselves that are told what to do by the brain and if they don't comply they are eliminated in the colosseum section.

This will lead to an unwanted memory loss did your brain cells that need to be replaced by that nanosecond or else they have to outsource by recruiting.

Sometimes these cells are just a bunch of lazy and useless quirks that don't do anything but sit around in the brain and let human stupidity take place and also resulting in awkward moments. Their only function is to look at a hot woman and mistaking her for flirting with him or her. This can lead to an embarrassing confrontation with the partner resulting in a fractured rib and a black eye.

The amygdala (almond of the brain) is an almond-shape set of neurons located deep in the brain's medial temporal lobe. Shown to play a key role in the processsing of emotions.

Without this humans could not eat almonds because of their fragile feelings because this will affect the limbic system causing a bad reaction to everything that looks like an almond.

The synapse is an important feature of the brain because it is the junction between the terminal of a neuron and either another neuron or a muscle or gland cell, over which nerve impulses or informants passes information to the nerve in muscles telling them how to act.

However they have to ride special buses in order to get to their destination that costs the way too much for riding fare and also sometimes they have to be replaced by assassin cells.

What happens if you don't have a brain?

Many catastrophic events can happen when you don't have a brain such as:

Community content is available under CC-BY-SA unless otherwise noted.
Advertisement