"What beauty of two mountains" -Unknown

Breasts, boobies, Boobs, the female breasts are mammary glands. The girl's boobs by definition are the most attractive and make the men giddy. There are girls with more than two breasts these women are goddesses.

The breasts are made up of soft tissue, fat, milk and they often feel very soft like a bag of sand or water balloon.

Breasts have many names and use. The word breasts have been mentioned since the dawn of man. Breasts also go by the common name boobies from the boob-bird's fetish to make nests in the cleavage. This term has been disputed for years now and now more common than the word breasts. Man's first encounter with breasts is when he saw his prehistoric female friend topless and nude then on he fell in love with the fountain of milk. But modern-day society banned the display of breasts in public. This caused a public outcry from the Mankind Community.

Breasts are the oldest tool in the world to lure men and boys. More the breasts better the attraction. Only the weak can't escape the power of breasts.

How to Flaunt Your Breasts

The most treasured part of the female breasts, nipples, provides milk in a natural attempt to persuade babies not to worship cows. Nipples are also good for shooting lasers, although no one has yet found the switch for this.

Some states allow flashing boobs in places. Like in Colorado flashing your boobs is legal as long as you don't have frostbite at the end of the flashing. New Mexico you could never flash your boobs you know you can flash them anywhere you want except on sacred grounds like Area 59 you may not flash them there. 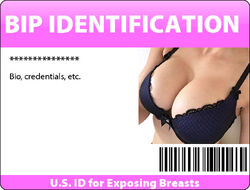 The states now want women to wear an ID for their right to flash their boobies in public but a 2009 rally called for a change in the government's biases against these acts.

However, this ended when the protests reached its maximum capacity and the Supreme Court told the local governments to repeal the boob identification policy as unconstitutional and tittyphobic against women's rights.

Loose breasts, also known as saggy D-cups syndrome, a common condition that affects the female breasts and makes them sag and hang overtime and also causes them to bounce and jiggle.

There is no cure for this condition however you still don't mean that men don't enjoy their wife or girlfriends who are affected by loose breast syndrome.

Also, there is a current trend surrounding women with LBS and many online communities discuss the positive side of the syndrome and came up with a conclusion that it is a beautiful and rare gift.

However, some criticisms from the doctors say it's unhealthy to lose breast syndrome and there are risks of getting them caught in things like doors and windows causing damage to the tissue.

This is not as common as getting them stuck in the refrigerator or couch where the breasts would slip out of the shirt and recommend wearing a bra at all times is crucial to safety and health.

The term saggy D-cups syndrome is considered derogatory causing embarrassment, anxiety and should not be used to describe the condition.

Also, this causes a public outcry when somebody called a woman a "sagger" and ran away and a huge riot broke out causing a lot of damage to property and resulted in dozens of arrests and injuries

However, the charges were dropped and the women went home forgetting about this whole incident until the next day when they found something else to complain about like walking cactuses in Central Park.

Extra breasts are found only on women who are lucky and fortunate to get them.

But some extra breasts can cause extreme excitement in men and often this can be a huge problem for the woman who is trying to live a normal life.

They have their benefits too like getting a great lifestyle and being noticed from the crowd and also not letting anyone stand in the way.

These types of breasts are quite common when one breast is smaller or larger than the other causing confusion about buying the right bra or bikini.

However, they are also fun to have and often used in dancing and socializing with other people.

Retrieved from "https://weirdopedia.fandom.com/wiki/Breasts?oldid=10814"
Community content is available under CC-BY-SA unless otherwise noted.